It is but obvious that despite the speculations of what must have caused the departure of Ngonso and her followers from Mbo’nso, and coupled with the fact that no known reasons have been known yet, they traveled up the Mayrin Valley to a place called Ndzen Nso’ somewhere around the region of Dzevru where they moved to Kovvifem after sometime. From what Banboye found out, “The most widely held tradition claim that the area was un-occupied, except by the visiting hunters, presumably from the Nkambe Plateau. But there is also the story that N’Gounnso’ and her followers met a small group of settlers called the Visale and later known in Nso’ tradition as the the Nso’ Mtaar” (Banboye: 2001 pg 13) 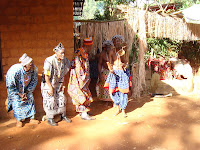 They were hospitably received with a reception reserved only for a lost but found family which amazed the fugitive princess and her descendants. This surprised them because during this period, strangers were always received with lots of suspicion for fear of being captured and enslaved with their hunting weapons. It is not clear why such a welcoming people will have to surrender to the Nso Dynasty but it is stated that the Visale “by negotiation surrendered to the authority of Nso’ dynasty.

The two groups were thus amalgamated to form the nucleus of the Nso’ state”… Based on the following terms.
1. Mtaar to be the “atar Nsay”- fathers of the Land.
2. Royal animals- meat to Fon. Skin to Mtaar.
3. Fon’s successor’s mother must be “Mtaar” whose “Kitaayiy” advises the Fon, when state is threatened, which step to take. NB (Read Fr Solii Ngah’s paper on Kitaayiy)
4. The Mtaar must not be regarded as captives and so must not give servants to the Fon.

With these terms we can already see that conflict resolution already existed amongst our people as war and slavery was never part of their intentions. Such fair share of power could only help expose a Nso man as a selfless, greedless and as a contented group of people. It is but normal that N’Gounnso must have spearheaded the negotiations herself but what is not clear is if she became the first recognized “Fon” of Nso dynasty or one of her sons.

This dilemma is based on the fact that Nso’ tradition does not enthrone women as “Fon” and if this tradition held at that time, then one will probably state that Her son would have been the first recognized Nso Fon while his mother N’Gounnso became the first “Queen mother of the Fon of Nso’, also known in Lamnso as Yaá Yeéfon” (Banboye: 2001 pg 14) 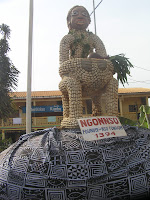 The sad thing about this stay in Kovvifem is the fact that names of the Fon that reigned while there are up till date not been assigned or known. But if one visits the area, it is very likely to count about 18 to 20 graves of the Fons buried there yet we do not know their names. Banboye suggests that maybe Nso King makers’ can design some names to the graves in order to give us a complete genealogy of all the Fons of Nso from the First to the present.
(Below are Pictures of the Tikar Genealogy which I think the King makers can use to design the Nso Genealogy. ) 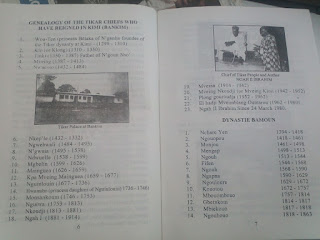 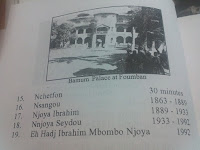 Worth noting is the fact that N’Gounnso dynasty had always moved with its “Things from Rifem” which were also brought from Mbonso’ to Kovvifem.

These “things” comprised of the regulatory society (Nwerong) 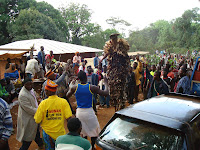 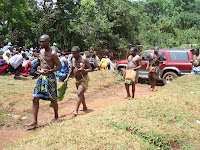 and the model of the Seven Royal councilors and Seven palace stewards. 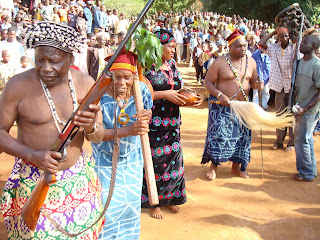 Nso People,  peace loving, always willing to reconcile, maintained and strengthened the Link with Tikar and Kimi by the accession to Nso’ of the groups mentioned earlier in part one who claimed to originate from Kimi. These included the Taankum, Menjey, Mbite’ey, Nkim just to name a few.

While at Kovvifem, other more and many settlers kept flocking in during this period and this increased and enlarged the population to the Fondom often referred to as Chiefdom. Majority of these were origins from the North, West and North west regions. This involves that the Clans of “Do’. Ndzeendzev, Tan, Mbam region; the Ki, Mbiim, Mbiigiy and Ngamase clans from the North West and the Jem, Mbisey & the Lunkuy clans from Oku.
The list is inexhaustible as some few clans came from the southern origin, we have the Ka’ from the Ndop plain, situated near Bambalang and Faa from Kijem Ketingo.

Banboye states that “the similarities is more specialized in  vocabulary, in particular that relating to kinship and political institutions would lead one to suggest that the War (Wat) people might have played a role in the formation of the Nso’ State and language, rather similar to that of the people surrounding Foumban in Bamum” (Banboye 2001: Pg 21)

He goes further to state with certainty that the coming together of so many clans, speaking different languages must have greatly influenced the Tikar language brought by N’Gounsno and her followers from Kimi. “Therefore, the Lamnso’ as spoken to-day by the Nso’ people, is a combination of most of the languages originally spoken by the various clans that joined the Nso’ Dynasty at Kovvifem for security reasons.”

William Banboye always ended each short research with some few questions to guide the readers in a more depth understanding of his presentation. Here are the questions for this chapter:
Questions:
1. Where was the first Capital of the Nso Dynasty built?
2. Whom did N’Gnounnso and her followers meet in the area where they made their capital?
3. Who was the first Fon of Nso’?
4. What did the N’Gounnso’ Dynasty bring from Kimi?
5. Name some of the Clans that surrendered themselves to the Nso’ dynasty at Kovvifem and say where they came from.
6. What is the origin of Lamnso?

Next chapter: 4. OFFSHOOTS FROM KOVVIFEM DYNASTY.
Posted by Shey Tatah Wo Scandy at 7:19 PM